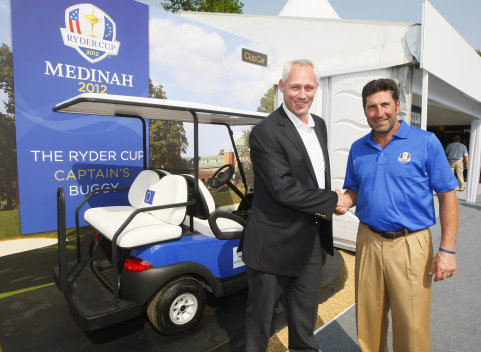 Ryder Cup European Team Captain José María Olazábal has said a fleet of Club Car vehicles set to be used by him and his four Vice-Captains will have a “crucial” role in team management at Medinah Country Club, Chicago, in September.

Olazábal, who will lead Europe at the 39th edition of The Ryder Cup, made the comments during an official presentation of the Captain’s Club Car at the BMW PGA Championship at Wentworth Club.

“For the Captain, it is important to be as close to your players as possible. You need to get to each match as fast as you can, so the golf cars are crucial,” Olazábal explained. “You need to know how your team is getting on and how your opponents are doing, and to share that information you need to cut through holes, cut through the crowds to cover the distance.”

Olazábal has twice been a Vice-Captain and has played seven times in The Ryder Cup, leading the celebrations after Europe’s first victory on American soil in 1987.

“The emotions at that Ryder Cup were incredible,” recalled Olazábal. “To be part of the winning team was very special. After we won, everyone was happy and was singing and doing all kinds of crazy things. There was also a young kid in those days who did a silly dance on the 18th green, but I don’t think you’ll see me do that again.”

Asked how he will feel when he jumps onto his Captain’s Club Car on the first morning of The Ryder Cup in Chicago, Olazábal said: “I couldn’t be any prouder. The Ryder Cup is a great event and is very close to my heart.”

Club Car will not only supply vehicles for both Captains and all Vice-Captains, but for all team and match officials, as well as all on-course television and event logistics.

European Ryder Cup Director Richard Hills said: “Club Car makes The European Tour move. The fleet provides an invaluable service to our TV company without which the team that delivers the TV pictures wouldn’t be able to function.

“Of course, at The Ryder Cup, the vehicles play an important role – especially for the captains. The pictures of Seve driving around on his Club Car at Valderrama in 1997 were legendary, so to see Club Car present José María Olazábal with his Captain’s car today was poignant.”

To see a full video interview with José María Olazábal, and to hear his Ryder Cup tribute to Seve Ballesteros, visitwww.clubcar.tv