Henley GC’s sponsors to get the Eagle app ‘marquee’ treatment 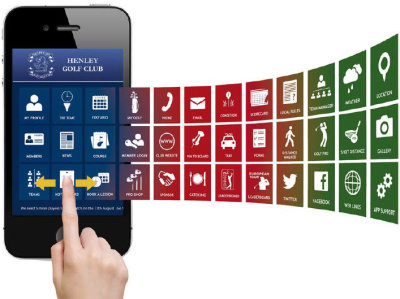 Henley Golf Club in Oxfordshire is attracting additional sponsorship income from both existing and new sponsors as a direct result of a new feature in the Eagle club members’ app. Henley GC’s dynamic club manager, Gary Oatham, installed the new app late last December and is already getting very positive feedback from the 300+ members that have already downloaded it.

The Eagle app’s upgrade has a new ‘marquee’ feature which allows text to roll across the top and bottom of the app’s Home screen. These marquees bring important information to a member’s attention immediately, and the messages are populated automatically from pre-determined sources eg. the latest news or course conditions message content.

Gary has also exploited the multi-sponsor facility whereby instead of just one sponsor, he can now have multiple sponsors presenting their brand messages in sequence in the Title Bar and the Sponsor section of the app.

Gary comments, “Thanks to the Eagle app, I’ve been able to approach all our existing sponsors and several new ones with a simple proposition: the app gives them a great deal of additional brand exposure to a significant portion of the club’s membership. It’s a simple thing to wrap up a sponsorship package based on regular opportunities for messages that run across the app’s Home screen, and for example add in some e-shots as well to our large high-end membership.”

He continues, “Because it’s web-based rather than native, the Eagle app works across all platforms: smartphones and tablets as well as laptops and desktops of course. As these mobile platforms are growing rapidly in popularity with everyone, especially our older membership, it’s making sponsorship that much easier to attract. It’s also clear that our online members are checking the app for new content on a daily basis, so the level of exposure the app provides compared to the club’s website is much higher, a key factor for sponsors.”

“The net result is that we’re confident of pulling in some £20,000 in sponsorship revenues this year, some of which is a direct result of our installing the Eagle app, and some of which of course comes from our having Eagle’s top quality course signage with sponsorship panels.”

“In addition, I’m not only saving the club several thousand pounds a year by not having to print the club diary, but the members are telling me it’s great to access the club’s diary and fixtures list on the Eagle app and know that the dates and timings of all the events are bang up to date – unlike the case with the printed diary.”

Gary’s also been delighted with the responsiveness of the Eagle app development team, as he says, “So far, my analytics show that 300+ devices have been enabled by Henley GC’s members in just two weeks.  The few members that had issues setting up their app have been dealt with very promptly; these usually related to a device’s internal parameters requiring a different setting.”

Gary summarises, “I was impressed with the upgraded Eagle app’s features in the first place, but as we installed it and new ideas came to mind, especially the multi-sponsor marquee arrangement for the app’s Home screen, it’s been terrific to see how responsive Eagle has been, and how keen they are to give their customers what they want.”