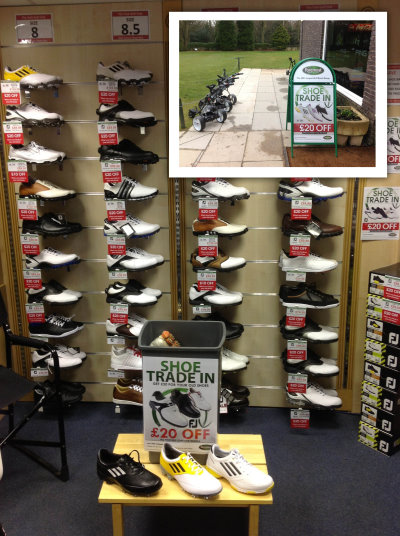 Foremost’s Elite Marketing Programme (EMP) professionals saw their shoe sales soar thanks to this spring’s successful Shoe Trade-In promotion for the fourth year in a row.

One EMP professional in Cheshire saw his shoe sales increase by 130% compared to the same period last year while another EMP member at a well-known club in Fife enjoyed a sales boost of 106%.

Collated sales figures show that across the country Foremost EMP members enjoyed sales increases on average of 18% during the Shoe Trade-In promotion.

Such figures are all the more impressive when compared to sales from the same period in 2012 when the Shoe Trade-In promotion drove sales up 22% over the year before.

The raw data also shows that Foremost’s EMP professionals were by far the biggest winners during the Shoe Trade-In promotion with participating EMP professionals selling twice as many pairs of shoes as their non-EMP counterparts.

“I think the results achieved during the recent Shoe Trade-In promotion prove beyond doubt the benefits of joining the EMP programme,” said Company Director, Andy Martin.

“We have been working hard to improve the programme and to increase the support we offer our EMP professionals and one example of that was the FREE A-Frame and supporting store signage we sent out to EMP members who took part in the Shoe Trade-In promotion. That might not sound like much to some members but when times are tough that sort of point-of-sale material can give EMP members a vital edge over their rivals.”

“We have worked hard to raise the bar in terms of the support we offer our EMP members and the fact membership is growing at an unprecedented rate would suggest that message is getting across,” added Martin. “Our goal moving forwards is to continue to improve the Elite Marketing Programme and to provide EMP members with a wide range of powerful, co-funded promotions that will help them drive their retail sales.”

Foremost members can get more information about joining the group’s Elite Marketing Programme by contacting Matt Lacey on 01753 218896 or email matthew.lacey@foremostgolf.com