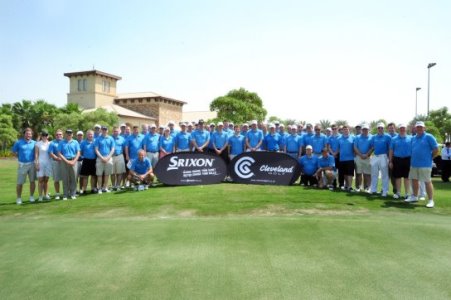 “2nd of October; 21:10 hrs; and Heathrow T4” was the date, time and information 44 professionals from all over the UK and 6 from Continental Europe had been waiting for as it marked the day they were due to leave to participate in the inaugural Cleveland Golf / Srixon Grand Slam event which took place in Abu Dhabi at the Gary Player Saadiyat Beach Golf Club.

This event was also going to give them the opportunity to be the very first people to get the chance to touch and feel the latest new products for 2012 from Cleveland Golf and Srixon for the season ahead including the brand new AD333 golf ball.

“The event was created as an incentive for our on course accounts to get behind the Cleveland Golf brand throughout the 2011 season. We saw fantastic success in terms of sell through with our accounts pushing the brand in their stores to make sure they had a great chance to get on the trip” said Ben Davis, European Marketing Manager Cleveland Golf/Srixon.

No stone was left un-turned for this event which culminated in a final day individual pro tournament played off the blue tees over a distance of 6733 yards which featured 3 lakes and 67 bunkers. The eventual winner of the individual event was James Erskine from Portpatrick Dunsky Golf Club, who shot a fantastic 1 under par 71 to claim the individual title closely followed by Ian Benson from Hindhead Golf Club and Jason Brant from East Berks Golf Club on 1 over par 73.

There was also a team event which was won by a team made up of James Erskine (Portpatrick Dunsky Golf Club), Jason Brant (East Berks Golf Club), Andrew Hurley (Arkley Golf Club) and Michael Smyth (Golfmagic.com).

“The event was very well organized, the facilities at Saadiyat Beach were first class and the course was superb. During the week we were treated tremendously by the Cleveland Golf/Srixon staff with the highlight being the 2012 products which look great.

“I am sure they will be a huge success. I look forward to being part of the Cleveland Golf/Srixon family for many years to come. To win the Grand Slam event was the icing on the cake and I look forward to defending the trophy next year,” said, James Erskine winner and head professional at Portpatrick Dunsky Golf Club