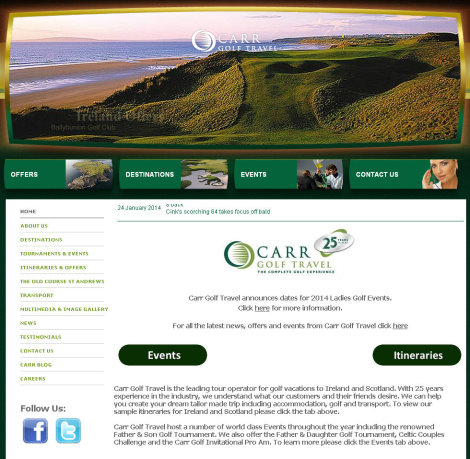 Carr Golf Travel has announced its 2014 event schedule, marking the Irish organization’s 25th year in business. Its two ladies events, the 7th Invitational Father & Daughter Golf Tournament and 5th Celtic Couples Challenge, will be held at the Old Head of Kinsale Golf Links, which was rated the most spectacular golf course on the planet by the respected Links Magazine. Carr Golf’s events have attracted 4,000 participants over 24 years and upwards of 200 teams will participate in Carr Golf’s 2014 events.

In July, the 7th Invitational Father & Daughter Golf Tournament will be held from 20th to 23rd July, at the Old Head Golf Links venue. After being played for six years at the Doonbeg Lodge and Greg Norman designed Golf Links, Carr Golf has decided to move the event to the fishing village of Kinsale, a stunning town in the South West of Ireland, known as the “Gourmet Capital of Ireland”.

In September, the 5th Celtic Couples Challenge returns to Ireland and will also be played over the Old Head Golf Links from 21st to 25th September. The Celtic Couples will however also take in a round at Cork Golf Club, a little known Irish course designed by Dr. Alister MacKenzie, who also designed Augusta National, Lahinch Golf Club, Cypress Point Golf Club and the San Francisco Golf Club.

“Trying to find courses and locations that match last year’s venues, Doonbeg and Turnberry, was a challenge, but the Old Head of Kinsale is such a spectacular course and the village of Kinsale is one of the most beautiful locations in Ireland, this made perfect sense for these ladies golf events” according to Marty Carr, CEO of Carr Golf Travel.